Asahi Refining is a name you might not have heard of before, that is because it is relatively new and it came about as the result of Johnson Matthey closing down. For 160 years, Johnson Matthey was one of the biggest precious metal companies out there, but in 2015 the company sold both the gold and silver refining business to a well-known Japanese company, which then went onto form Asahi Refining.

Asahi Refining has a parent company called Asahi Holdings, which is based in Japan and was founded back in 1952. There are two corporate locations in Japan with the first being in Tokyo and the other being in Kobe. Asahi Holdings handles precious metal and rare metal sales as well as recycling. In 2014, Asahi Holdings agreed to purchase Johnson Matthey’s gold and silver refining, although the sale was not completed until summer 2015. Due to the sale, Asahi Holdings took over refining operations of Johnson Matthey that were in Salt Lake City, Utah, as well as Brampton, Ontario, Canada. There is also another location in Canada, but that is not one of the refineries and is more of a business location.

Once that happened the two locations were combined to form the operational name Asahi Refining. Asahi Refining started out producing 100 ounce Silver Bars, and the bars looked identical to those that were previously produced by Johnson Matthey. The purity also is at .999 silver, and the company is certified as an LBMA responsible gold compliant company. 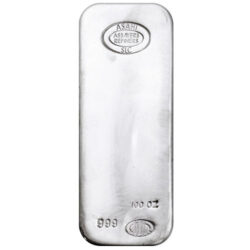