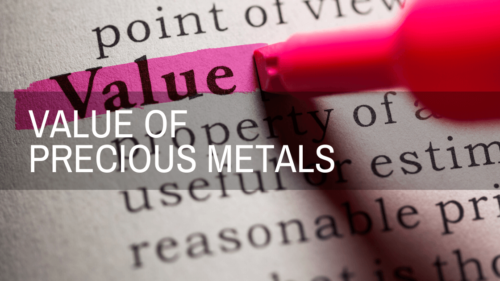 The value of precious metals has been steadily increasing throughout the years. Even after a few historical lows, gold and silver value, and other precious metals’ value have been going up steadily. We project that this trend will continue for a while.

As opposed to traditional money and currency, which only has value because a government tells you it does, precious metals like gold, silver, platinum, and palladium largely retain their value over time and have done so for thousands of years. One of the earliest exchange of silver for goods by merchants happened as far back as 700 B.C. Gold was a common commodity in the Roman times. Economies rose and fell, but precious metals have always stood strong.

The value of gold is an interesting subject. Gold has a long standing history of holding its value whether in its pure form or in the form of jewelry. In the 1930s prices dropped sharply as the relative purchasing power of gold soared.

During the global financial crisis of 2007-2008 gold reached $1,000 per ounce and hit a $1,800+ a few years later. The US dollar, however, sharply declined during those years due to a large increase in the money supply, the country’s enormous budget and huge trade deficits.

No matter where you are in the world gold often stands above other investments. This is especially true when public trust and confidence in government is low.

A simple macroeconomic principle almost always applies to gold – when supply is low, the price goes up due to increased demand. Especially because it takes 7-10 years to bring a new gold mine into production.

Gold and silver investment offers you a way to protect yourself from monetary volatility which stems from increases in the money supply by central banks. You cannot just “print more silver”, nor can you manufacture it out of nothing – the rarity of silver makes it hold its value better in the long run.

Silver is cheaper than gold, which makes it a great asset for both beginner and experienced investors. The low price also allows for silver stacking. Silver prices are more dynamic and more volatile, which can be both a positive and a negative thing in the short term. In the long term, the value of silver has been increasing steadily since 2004.

Platinum is a rare precious metal. It is also used for industrial needs. 82mil oz. of gold and 547mil oz. of silver are mined each year compared to platinum’s 5mil oz. It is a supply-demand classic. Palladium is just as rare with just under 7mil oz. mined in 2011.

Palladium follows closely though it’s “precious” value is slightly lower. The largest demand source for these metals is the automotive industry. As emerging economies such as India, China and Brazil are getting richer, people will want to buy more cars, therefore increasing demand and prices.